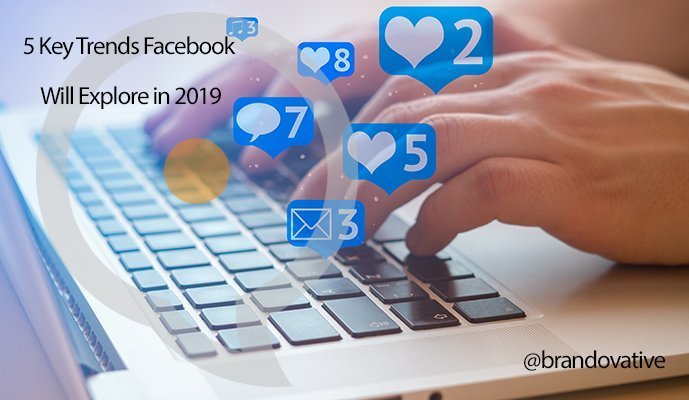 Facebook didn’t have the best of times in 2018 with all the backlash they faced about the changes in algorithms and organic reach taking a hit. However, 2019 looks promising for the social networking giant as it explores avenues such as micro-communities, pop-up stores, video stories, conversational commerce, and smart home devices. Read all about our take on Facebook’s 2019 plans in these five areas.

“What if you could easily connect with your closest friends and family and feel like you’re in the same room — even when you’re miles apart?” asked Facebook when they announced the launch of Portal in October 2018. Portal is a video communication device for the home, that is powered by AI technology. Portal and Portal+ are Facebook’s first venture into the consumer technology space after it acquired Oculus – the virtual reality headset maker for nearly $2 billion in 2014.

Will Portal be able to compete at par with Amazon Echo and Google Home in the consumer technology space? That’s something 2019 will reveal.

Facebook offers two types of conversational commerce avenues through its Messenger app – Sponsored Messages and Click to Message ads. Sponsored Messages are messages that allow you to send relevant offers, promotions or business updates directly to the people your business is connected with through Messenger. Click to Message ads are advertisements in which companies can create both the ad and the welcome experience that users see in Messenger after they click on the ad.

“Conversational commerce is another area in which Facebook plans to grow with the rollout of ‘Sponsored Message Ads’ directed toward users who have already initiated a dialogue with a brand or business,” says Unmetric’s Lux Narayan, as he speaks to MTA about Facebook’s foray into conversational commerce. Narayan adds, “Facebook needs to ensure it won’t spam people as this will surely be a turnoff for consumers. Restrict the messages to users who’ve sent messages to businesses first-hand and make the shopping experience through the app as personalized as possible.”

Facebook introduced Stories — visual content visible for 24 hours — way back in 2017, to sway focus off rival Snapchat, who introduced and popularized the form. As of May 2018, 150 million Facebook Stories were being put out daily, out of 2.2 billion monthly video stories. Facebook then moved to monetize the format, with five- to- 15-second ads that played through the videos.

TechCrunch quoted Facebook CEO Mark Zuckerberg sounding a warning bell that Facebook must ensure “that ads are as good in Stories as they are in feeds. If we don’t do this well, then as more sharing shifts to Stories, that could hurt our business.”

Narayan hopes that Facebook would try to improve user experience, instead of just copying off Snapchat. “The new feature of ‘Facebook Stories’ is aligned with the popularity of video content across social media networks. However, Facebook should make sure not to sacrifice user experience for speed or other factors. Another piece of advice for Facebook is to be creative and take ownership with the development of this feature instead of merely emulating what Snapchat has done,” he adds.

Emily Blair, Director of Digital Strategy & Research, Goodway Group, believes social video will be crucial for marketers in 2019. “In particular, the popularity of live video presents an opportunity for brands to engage with their audience in real time and build deeper connections with consumers. Shoppable video will also be big in 2019, with brands leveraging both social media stories and paid video ads to feature products and make it easy and seamless for customers to swipe or click to shop.”

Marketers, take note and don’t be shy to participate in the growing trend of video stories. Tip: Optimize your video content for vertical mobile screens as that’s the most consumed medium and ensure the content is valuable and shareable for maximum views and engagement.

Leaving the virtual realm behind, Facebook experimented with a brick-and-mortar retail in November 2018. They tied up with Market@Macy’s with nine different pop-up stores that showcased merchandise from 100 small business and online brands. This was done keeping the holiday shopping season in mind.

“The Market @ Macy’s helps both emerging and established brands reach new audiences by showcasing them in a physical space inside Macy’s. We know the power of connecting businesses with the people who love them most, which is why we’re proud to play a role in expanding the communities of these businesses to in-store shoppers at one of the most beloved retail stores in the world,” Facebook said in its announcement about the pop-up stores.

It was a bold move, and our experts spoke about it in Episode 24 of the MarTech Advisor Talking Stack podcast.

Facebook has recently made it easier for businesses to create their own Facebook groups. Groups for Pages allows businesses to set up fan clubs and groups centered around your super-fans. “Super-fans” are a group any business should be keen to target. By giving those extra-keen brand loyalists a chance to interact with each other as well as with the brand itself, groups create a powerful ecosystem in which members forge meaningful connections with your business.

“One of the developments Facebook recently announced for 2019, micro-community pages, are a good way to target specific audiences by region, product, or other factors,” says Narayan. He added, “When posting to these micro-community pages, businesses need to provide content relevant to that specific audience vs. publishing generic content that will drive people away from that community.”

Micro-community pages can be leveraged by businesses that want to get customers to interact without being compelled to purchase. You can identify what it is about your business that brings people together, or if you have a product, a group or page could help customers get real-time support and advice from experts at your company or other users.

Facebook has been trying to put all the negativity surrounding multiple data breaches and Russian influence in the Presidential elections behind. In 2019, Facebook has a lot in store for businesses, to make up for the frustration they caused Social Media Managers over the past year, with the amplification and monetization of Stories and video ads.